A Day in the Life

Are you struggling to find a haulier willing to take on continental work? We can help Click Here. Perhaps you are unaware of the problems UK truckers face now with the triple whammy of Brexit, Covid and good old bad weather. We spoke to our transport manager, Graham Welsh, on a recent trip to Lyon in France to get it from the 'horses mouth' as to how life is like post Brexit in the day of a trucker. 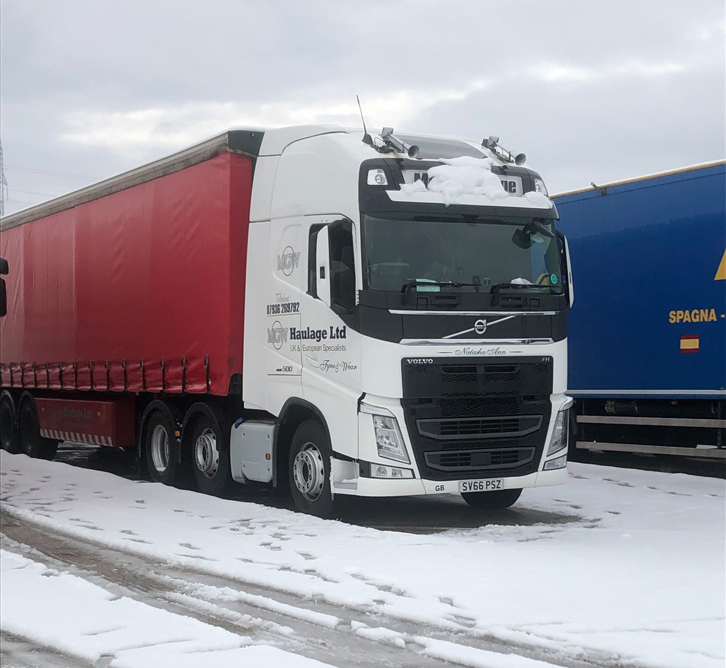 Graham told us about a major manufacturer based in Newton Aycliffe, County Durham who had approached him with an offer to work direct. "We can't get hauliers for love nor money" they told our transport manager (who still does the odd continental trip himself).

But customers need to be careful that they use a haulier with correct paperwork. MGW work through an agent to organise all the customs clearance paperwork to ensure a smoother transit across to France.

Do you need help with a load to the continent? Click Here

Passport for Kent and Covid Test

Graham set off on the Wednesday 13th January 2021, made sure he had his Covid test and Kent 'passport' and even though he told customs officers on the way to Dover that he had been 'fast tracked' they refused him access to the channel port initially and diverted him the full forty miles to Manston airfield as part of Operation Brock. Officers were diplomatic but Graham was forthright when he told them "Would you be happy after driving 17 hours?" He had previously drove from the North East down to Rotherham in South Yorkshire, back up to the North East then down to Kent. 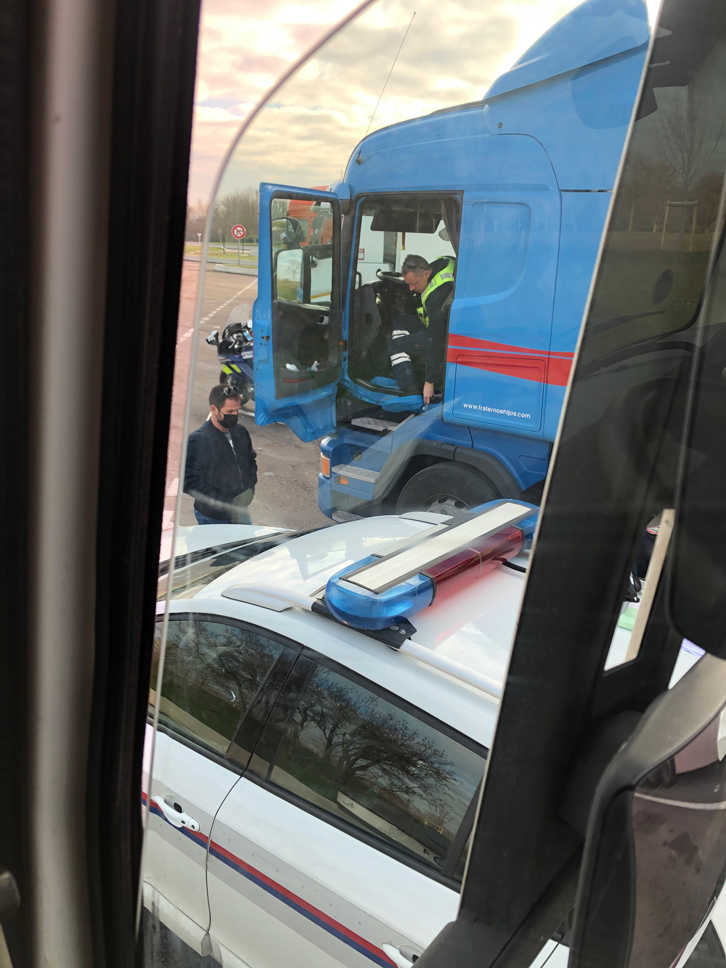 Graham believes however once people get used to the new procedures things will get better. He told us about the 'DOUANE' in France who are customs police and still drive around in a system of open borders, who had previously only stopped him once in ten years. He got stopped by them twice in one week in the first week after Brexit.

"There's nothing you can do about it" he shrugged. We spoke about the lighter side of life on the road and a Youtube video posted by comedian Jim Davidson of an incident recently whereby Dutch police had stopped a British trucker for simply havng a ham sandwich in his bait box!

Is it Brext or Covid? Or both? We asked the inteprid haulier who refuses to let these obstacles get in his way. "Both." He exclaimed.

"But, it would be easier if it wasn't for Covid and we wouldn't have to stop for all these tests. What I do is pull in to the likes of Wetherby (a couple of hundred miles up the road from Dover) and get my test there, that way if I've got symptoms at least it saves me driving all the way down. Plus I'm not wasting diesel."

Graham told us about the all of the new forms such as T1 (international clearance) form, the Kent "passport" KAP, clearing customs (twice) and a Euro 1 form. When you get on to the ferry dashboards display every trucks registration plate. Drivers look at the traffic light colour coded system to see how they stand. If there is a green light next to their registration number they are cleared for customs on the other side. If it displays orange they have to brace themselves for a wait and clear French customs.

Graham spoke highly of the French customs who were "lovely" in his words, which may come as a surprise to many. But he told us that that wait was only about half an hour. But still a long way removed from the days prior to Brext of just been able to drive straight through.

"So it definitely a lot harder". His trip started at Rotherham then back up to Newton Aycliffe and back 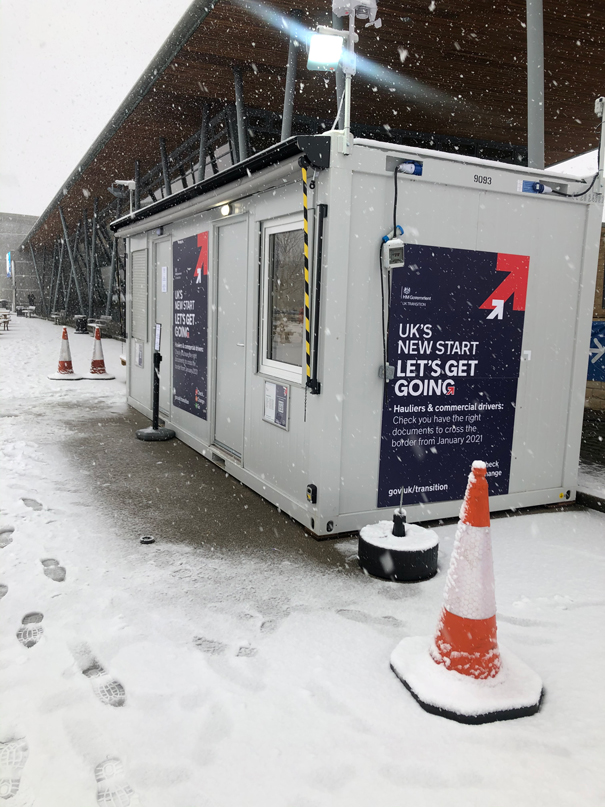 down the country to Dover. Stopping at Leicester Forest East service station for his Covid test (see photo right). A negative test meant he was fast tracked to go quicker through customs. Ultimately the load was heading for Lyon in France. But going down the M20 motorway, Operation Brock was in full swing and that led to the detour, 40 to 50 miles out of his way. Another Covid test at Manston, then on to Dover and further delays. On to the ferry then the new traffic light style system that led to further delays at the French side in Calais. However Graham did point out again that the French customs did make this a lot easier than could have been the case.

Graham estimated that a normal 2 to 3 and a half day round trip took at least an extra day all told.

The MGW Haulage pride of the fleet brand new Volvo then made it's way to Lyon in France where our driver awoke to snow!

On the way back we caught up with Graham as he drove around the "rammed" truck park at Wetherby Services in Yorkshire as he looked for a place to park to get yet another Covid test.

For all this was another successful trip by MGW Halauge our driver did acknowledge that many drivers and companies are apprehensive of taking on this type of work.

And as such we here at MGW understand there may be potential opportunites to assist UK based businesses who may need to enlist the help of hauliers (like ourselves) who are overcoming these new obstacles to ensure a smooth flow of their continental supply chain.

Do you need help with a load to the continent?Click Here 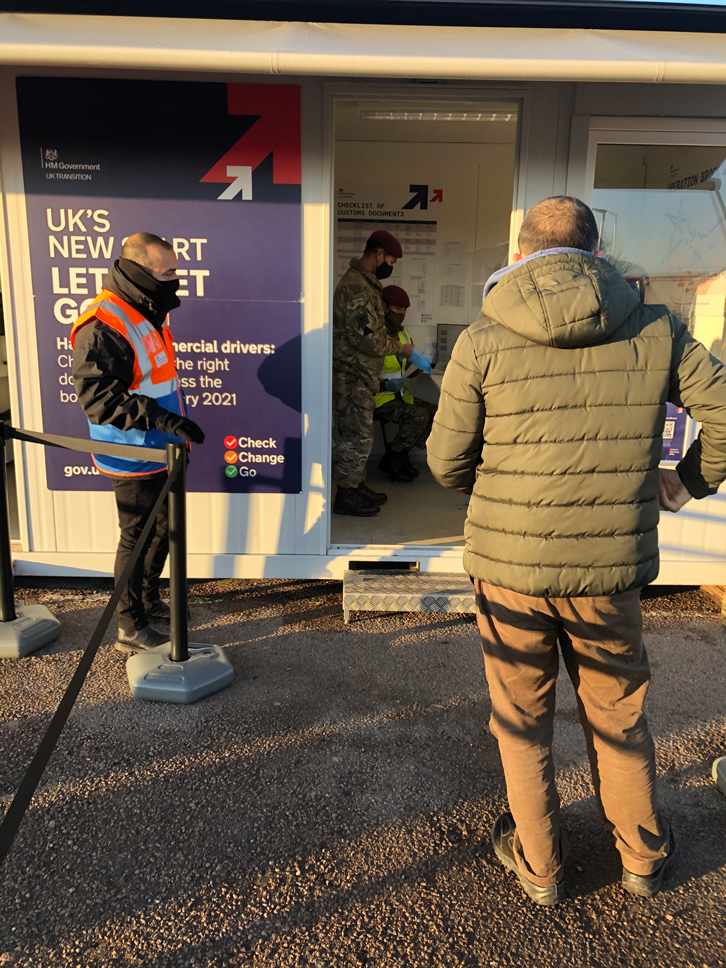